“Certainly, sir, would you like that on white or granary bread?”

In more than eleven years taking sandwich orders at the counter I have never known this. This season it’s happening at least once a week.

A. Has the pandemic led to us being more indecisive?

B. Has the pandemic led us to not care about the smaller details?

C. Are people who really want white bread ashamed to order it but can’t bring themselves to ask for granary?

The choice is yours.

We’re open again but with a difference.

This time we’re a takeaway for a couple of weeks.

Current regulations allow people to meet outside in a park or garden so we’ve put out the benches and will be a garden park.

Until 12th April. When the tables and chairs can go out.

We’ve been fortunate this week. The sun has been shining and the combination of soup and ice cream, cakes, hot and cold drinks has been enough. It’s been great to see so many people: regulars who’ve greeted us after an unusually tricky winter; families who’ve brought their children out for the first time in months.   There’s a frisson of excitement about a cream tea, even when the tea is served in a compostable cup and the scone in a cardboard tray with a wooden knife.

“May I have the recipe for that blackcurrant crumble?”

A return to an old blog feature - customer of the day.

We had plenty of candidates today but one man stood out. His order came to £13.75.

“1375,” he said, “Not sure about that as a year. I like to think of something that happened in history and that’s a tricky one.” He gave it another few seconds then added, “It was the time of Edward III and the 100 years war. One of the treaties that ended the war was signed in 1375. Not very exciting, but there you go.”

I hope he comes back every day to add to my education.

We have just a few weeks left of what has been, for everyone, a very strange season. We’re aiming to close on Sunday 1st November. I say “aiming” because who knows whether we’ll be allowed to stay open that long. It’s all about the known unknowns and the unknown unknowns...

Customers have reacted very well to the changes since 4th July and have followed our guidelines. We’ve had plenty of comments about how safe they feel with the social distancing measures in place and the proof of that is that they have returned, often with other people. Plenty have signed in using the NHS app and, in the whole of the time we’ve been open, we’ve only had a handful of visitors refusing to give us contact details. More people than ever have chosen to sit outside even on the not-so-warm days.

This week has been among the most difficult I’ve faced. The weather has not been kind, which always has an impact, but it also feels as if the rise in cases across the country has also had an impact. Are more people choosing to stay at home again? This weekend will be telling. The weather forecast is mixed but mostly pretty good. We could do with some better numbers to counter some poor days this past week.

There’s still humour to be found in all this uncertainty, thank goodness. We hear tales of masks issues and steamed up glasses, parents who say they’ll happily sit apart from their children even though they’re still within the rule of six, the same comments about calories and no-sugar-thank-you-I’m-sweet-enough.

My favourite comment came from a lady who told me that she came to us because she knew it was possible to be “socially different”.

Since we reopened we have mainly been using paper plates. Not ideal but we don’t have the space at the moment for three people to wash up so for the time being we’re trying to limit the pans, crockery, cutlery and utensils.

Today we found another benefit came from using paper plates. 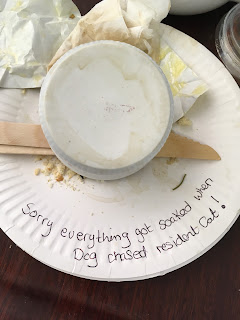 Soup has returned to our menu.

We’ve made it every morning since I remembered to add bloomer bread to our delivery from the bakery and since we managed to dig out the soup pan and blender from the back of a cupboard.

No one was happier to see SOUP on a chalkboard than Peter and Janet (who come two or three times a week to tend our large garden) but their excitement was not because they wanted soup for lunch.

It was because they have an abundance of courgettes from their own garden and they know we’ll use them.

Today’s soup was courgette, celery and pea. It was very green. 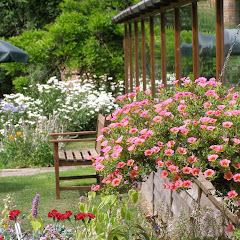